I’ve Had a Stroke…Please Believe in Me

For my last blog about stroke, I’d just like to address in general the importance of care teams keeping a positive attitude about patient progress and prognosis.

Toss the neurochemical challenge of emotional lability into the mix, and it’s very difficult to stay positive about recovery. The care team needs to strike a balance between keeping the patient’s expectations for recovery realistic while at the same time conveying that a return to a meaningful life at any stage of recovery is absolutely possible.

The staff at Penetanguishene General Hospital, where I spent the first three months of stroke rehabilitation, excelled at striking this balance. Right from the start my program taught me the skills that I’d need to live one-handed, as I did exercises to rehabilitate my weak hand. I practiced writing, eating, self-care, and eventually cooking on a small scale. And I learned later that the staff there expected me to recover very, very little use of my left arm and hand. 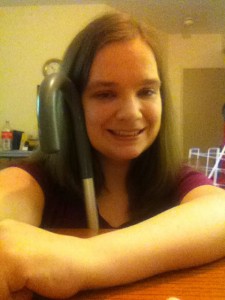 But no one ever said that to me while I was there. I was under the impression that I was practicing learning to live one-handed because I needed a way to function during what could potentially be a long recovery journey…but not because there was little hope of ever getting any function back. If I’d heard that, with all the emotions I was already experiencing, I don’t know if I’d have seen much sense in trying to recover. After all, during my first night at PGH, I apparently yelled at a nurse that everyone should just give up on me, because it was obvious that I was never going to walk again. (I don’t remember this, but it had been a terrible day. The transfer from the hospital in Toronto had been difficult, and I’d only stopped throwing up from sheer nerves around dinnertime.)

Should care teams lie to clients about prognosis, then? It’s more about lessening the focus on prognosis. Awareness about the effects of stroke, about disability in general, and about the needs of people with disability becomes more and more widespread with each passing day. The focus for the care team should be on each member using their unique strength and skill set to build the client’s capabilities and capacities as much as possible, always working under the assumption that it’s possible for everybody to have a fulfilling life.

I wanted recovery very badly and I worked very hardly for it, and even then I wasn’t easy for my care team to work with sometimes. I never meant to be difficult. I think that very few people who have had strokes actually mean to be difficult patients.

About Physio In Motion

Physio In Motion in-home rehabilitation makes being proactive about your health easier, more convenient and more enjoyable than ever before. Our unique in-home services takes the pain out of getting to your appointment and lets you focus on feeling better.